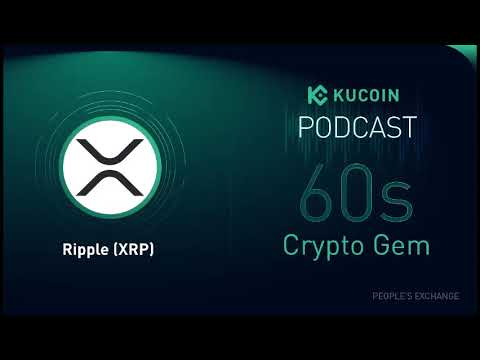 Welcome to the 60-second Crypto Gem by KuCoin. Today, we will be talking about Ripple and its native token, XRP. Ripple was built to be a better Bitcoin, and a replacement for SWIFT, by being faster, more cost-effective and energy-efficient. XRP is the cryptocurrency native to the XRP Ledger, a blockchain run by Ripple, and engineered by David Schwartz. It is a digital asset built to replace the dominance of USD by becoming a bridging currency without a central intermediary. The use of XRP would increase liquidity for institutions transacting through the blockchain. Ripple recently piloted a private ledger for Central banks launching CBDCs to provide a secure, controlled, and flexible means of issuing and managing digital currencies. Despite the recent SEC lawsuit, if XRP does become integrated within the banking systems, banks might not only leverage the blockchain but also will hold XRP within their reserves. This has been the 60-second Crypto Gem by KuCoin.